Davinci Jeremie, a Youtuber from Chile, once encouraged his viewers to purchase Bitcoin when it was just $1 back in 2013. Of course, nobody really heeded his advice because, at that point in time, nobody knew exactly what Bitcoin was. Many would think that it was one of those investment scams or Ponzi schemes that would lead to nowhere. One thing is for sure, only a handful had predicted its success, and at SGD $7000 today, many would have wished that they had done a bit of research on bitcoin and other cryptocurrencies back then. 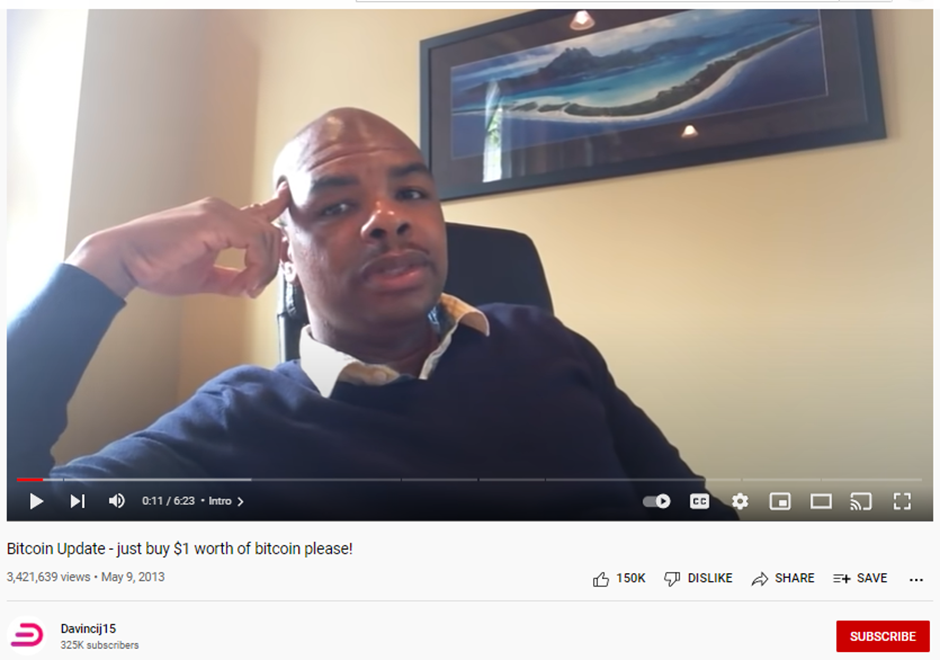 Figure 1.0: Davinci Jeremie’s Famous YouTube Video, encouraging his viewers to purchase bitcoin when it was at $1

Even so, it is still not too late for individuals and businesses to hop onto the trend of investing into cryptocurrencies as it is still in its early stages with the recent emergence of alternative coins, or better known as altcoins.

How Exactly Do Cryptocurrencies and Blockchains work?

According to cryptocurrency platform, Coinbase, cryptocurrencies are decentralized money which has been designed to be used over the internet. The most straightforward way to obtain cryptocurrencies is to purchase them. However, it is also possible to mine them as well. Each unit of cryptocurrency is mined through the use of computing to resolve mathematical problems that in return, generate these units. Some are relatively easier to mine than others and one of the reasons why bitcoin is the most expensive cryptocurrency is because of how difficult it is to mine a unit. It takes incredulous amounts of computing power and the time it takes to mine a bitcoin is akin to finding a small piece of gold in a massive coal mine.

Cryptos today are heavily reliant on blockchain technology, which are distributed databases shared among computer nodes within a peer-to-peer network. In simpler terms, blockchains collect transactional information in the form of blocks. When these blocks are filled, they are linked to the preceding blocks before them, forming a chain of data blocks, eventually forming what is known as a blockchain. The data stored in a blockchain is immutable and could not be tampered with. This makes blockchain a secure and trusted decentralized record storage for all kinds of crypto transactions.

Leveraging on Blockchain for Businesses

Blockchain could prove to be a game changer for CFOs should it be leveraged strategically. There are 2 key areas that Blockchain can be used for businesses:

Blockchain technology can be used in creating real-time distributed ledgers. When it comes to transactions, due to its secure nature, every transaction that is being recorded is validated almost instantaneously and CFOs need not have to worry about the accuracy of the data involved. Real-time reporting would give a live view of the payment cycle for CFOs to analyze and provide key insights on the company’s financial performance.

“Smart Contracts” are programs placed in a blockchain that are executed when certain conditions are being met as part of a transaction. They are usually required when participants of the contract would want to automate their business processes in a hassle-free manner. The integrity and efficiency of these smart contracts helps to ensure a reliable audit trail for businesses, and this would tremendously streamline the auditing processes for CFOs and businesses altogether.

What do CFOs need to know about blockchain technology and how it can impact the CFO?

For CFOs, this enables corporate financing through commercial papers issued as digital securities in smaller tranches of S$20m to S$50m instead of the usual S$200m to S$500m required for a traditional bond. ADDX facilitated digital commercial paper deals for two issuers in 2021 – CGS-CIMB and the SGX-listed ValueMax – and we expect more such deals in 2022.

As blockchain technology gains traction in the financial sector, blockchain companies will innovate and find new areas and products that could benefit from the efficiency of the emerging technology. For example, we began applying blockchain technology towards tokenising open-end funds for the first time last year, in addition to closed-end funds, and we are likely to ramp up the tokenisation of structured products as well in 2022.

Another trend is NFTs, which were very popular globally in 2021 and are expected to continue growing this year. We are starting to see NFTs used to represent not just art works but financial products like derivatives as well, which indicates a coming together of the crypto world and the traditional financial world. The challenge lies in getting blockchain engineers to build the tech in a way that would make regulators comfortable – not an easy challenge, but if done right, it would allow the best qualities of crypto and traditional finance to be combined in a very powerful way.

Blockchain: Worth the Investment?

Blockchain is perceived to be the future of global markets for it promotes transparency and digital trust within the markets. Businesses need to understand that while blockchain is still in its early stages, it is still a technology that holds massive amounts of potential. CFOs will have to rely on their visionary skills to understand and adopt blockchain into their businesses. While it may appear to be an uphill task today, it will prove to be an investment that would ameliorate their business over the long run.

Despite Global Slowdown, Asia’s Economies Show Resilience And Growth For 2023

DigitalCFO Webinar Series: CFOs in the Future of Finance: A Technologically-Driven Leader